LAS VEGAS, Oct. 12, 2017 /PRNewswire/ -- Celebrated chef, author and television personality, Giada De Laurentiis, is anticipated to open her second restaurant, Pronto by Giada, at Caesars Palace in early 2018. Taking a page from her highly-successful, GIADA, at The Cromwell also in Las Vegas, Pronto, will offer guests De Laurentiis' signature Italian fare with California influences but in a fast, casual format. 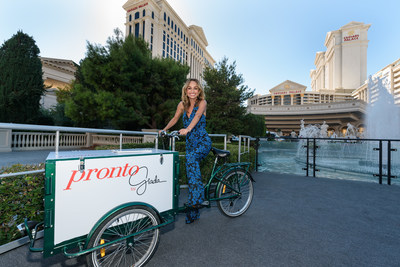 "With Pronto by Giada being my second restaurant, I wanted to do something a little different, with a more casual approach than my first restaurant, GIADA at The Cromwell," said De Laurentiis. "This will be a great introduction to my food and brand, as it's the lighter side of Italian with a fresh, California influence. It will be perfect for a fast bite, and then guests can go across the street for a finer-dining experience."

"Caesars Palace prides itself on having the most impressive collection of celebrity chef restaurants—the addition of Giada De Laurentiis and Pronto by Giada brings our culinary empire to an even higher level of excellence," said Caesars Palace Regional President, Gary Selesner. "Pronto will offer something for every guest—from those looking to grab a quick bite or an artisanal coffee, to those wanting to enjoy the chic space while leisurely enjoying charcuterie and a glass of wine, all conveniently positioned steps away from our convention center and Garden of the Gods Pool Oasis."

Pronto will be located adjacent to the world-famous Bacchanal Buffet and MR CHOW, and will offer breakfast, lunch and dinner options, made of the freshest ingredients and prepared in an abbreviated time, perfect for guests on the go or those looking for a leisurely bite. Once guests receive their dishes, a variety of seating will be available from counter and bar seating to casual lounging. Not only will the food offerings be fast and refreshing, but the beverage offerings will be as well, from the coffee program to wine-on-tap to a full service bar with signature cocktails.

Breakfast offerings will include house-made pastries featuring traditional and unconventional flavors including Italian Cornetti, as well as breakfast sandwiches and made-to-order smoothies; lunch and dinner will feature fresh-pressed Paninis, salads, De Laurentiis' twist on sandwiches with her lobster roll and gooey grilled cheese, antipasti and Formaggi and Salumi platters. For those with a sweet tooth like De Laurentiis, the dessert selections will be the perfect combination of light and decadent with gelato and sorbetto in both familiar and Giada-fied flavors to her famous lemon ricotta cookies and a selection of eye-catching cakes sold by the slice. Coffee fans will delight in the artisanal selections available around the clock, featuring traditional fresh brews to nitro options and eye catching foam art.

Pronto will be an open, light space encouraging guests from all areas of Caesars Palace to place an order, take a seat and enjoy the scenery. As she did with her first restaurant, De Laurentiis took inspiration for the look and feel from her own home. With natural elements such as wood and marble quartz, coupled with pops of color in the Italian-inspired tile, Pronto will be warm and inviting while providing an ease from the excitement of the casino floor.

ABOUT CHEF GIADA DE LAURENTIIS
Emmy Award-winning, globally renowned celebrity chef, television personality and New York Times best-selling author, Giada De Laurentiis brings her extensive culinary background to her new restaurant. De Laurentiis cultivated her staple Italian cuisine in her family's kitchen in Rome and Le Cordon Bleu in Paris.  Since her debut in 2002, De Laurentiis has become one of the Food Network's most recognizable faces, starring in many TV shows, the most recent being, Giada Entertains and Giada's Holiday Handbook alongside the highly popular series, Food Network Star.  She is also a correspondent on NBC's Today Show, where she highlights current trends in travel, cuisine and lifestyle. De Laurentiis is the author of eight cookbooks as well as her children's chapter book series, Recipe for Adventure that transports readers to famous food cities around the world. She also recently launched a new lifestyle website, Giadzy.com, where she showcases new recipes, videos, lifestyle and travel tips. De Laurentiis currently resides in Los Angeles with her daughter Jade.

FORWARD LOOKING STATEMENT
This release includes "forward-looking statements" intended to qualify for the safe harbor from liability established by the Private Securities Litigation Reform Act of 1995. You can identify these statements by the fact that they do not relate strictly to historical or current facts. These statements contain words such as "expected" and "plans" and "anticipate" or the negative or other variations thereof or comparable terminology. In particular, they include statements relating to, among other things, future actions and future performance, and future financial results of Caesars Palace.  These forward-looking statements are based on current expectations and projections about future events.

You are cautioned that forward-looking statements are not guarantees of future performance or results and involve risks and uncertainties that cannot be predicted or quantified and, consequently, the actual performance of Caesars Palace may differ materially from those expressed or implied by such forward-looking statements. Such risks and uncertainties include, but are not limited to, the following factors, as well as other factors described from time to time in our reports filed with the Securities and Exchange Commission (including the sections entitled "Risk Factors" and "Management's Discussion and Analysis of Financial Condition and Results of Operations" contained therein):