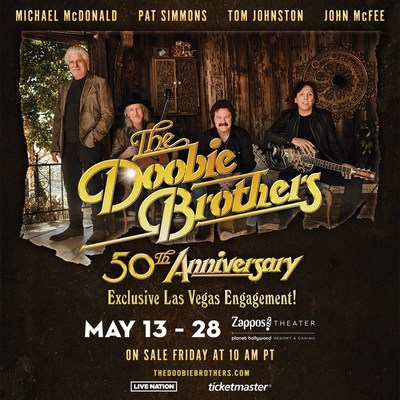 The eight performances going on sale are:

Tickets may be purchased online at ticketmaster.com/DoobieBrothersVegas. All shows are scheduled to begin at 8 p.m.

About The Doobie Brothers
For over five decades, The Doobie Brothers have been known for delivering mind-blowing, roots based, harmony-laden, guitar-driven rock and roll – all of which recently culminated in an induction into the 2020 Rock & Roll Hall of Fame. Boasting one of the most loyal fan bases in music, selling more than 48 million albums, and winning four GRAMMY® Awards, The Doobie Brothers continue to write and record new material and tour the world. Their No. 1 singles "Black Water" and "What a Fool Believes," both gold, lead a catalog of indelible songs that include: "Listen to the Music," "China Grove," "Jesus Is Just All Right," "Rockin' Down the Highway," "Long Train Runnin'," "Take Me In Your Arms," "Takin' it to the Streets," "Minute by Minute," "You Belong to Me," "The Doctor" and more. In all, the Doobies have tallied up five top 10 singles and 16 top 40 hits. Beginning with their multi-million-selling sophomore collection Toulouse Street, the Doobies have 3 multi-platinum, 7 platinum, and 14 Gold albums. Best of the Doobies has sold more than 12 million copies – a rare "diamond record." In 2021, the band kicked off their 50th anniversary tour which reunited Tom Johnston, Michael McDonald, Pat Simmons, and John McFee for 49 stops before concluding in 2022. Additionally, The Doobie Brothers are gearing up to release their autobiography, Long Train Runnin' on July 26, 2022.

About Planet Hollywood Resort & Casino
Planet Hollywood Resort & Casino is the centerpiece of the famed Las Vegas Strip, with 2,500 beautifully redesigned guest rooms and suites showcasing some of the best views in town, along with endless options of unparalleled shopping, distinguished dining, popular entertainment and a bustling nightlife. A bright, bold addition to the resort's portfolio, the Ultra Hip Rooms feature contemporary elegance and luxury bedding. Known as the place to play for its roster of A-list celebrity guests, Planet Hollywood's 231 restyled suites feature stunning views of the glittering skyline and daring décor elements such as suspended sofas, lounge-style living spaces and oversized modern artwork. The resort encompasses more than 100,000 square feet of gaming, Caesars Race & Sportsbook at Planet Hollywood, The Scene Pool Deck, several lounges, an intimate wedding chapel, and a relaxing spa and salon. Impressive restaurants include Gordon Ramsay Burger, KOI, Strip House and more. Home to the first pop music residency in Las Vegas, Zappos Theater is one of the largest theaters on the Vegas Strip and showcases a variety of resident headliners including superstars like John Legend, Scorpions and Shania Twain. Magician Criss Angel performs an over-the-top visual spectacular of "Criss Angel MINDFREAK®" in the newly-renovated Criss Angel Theater. Additionally, Angel along with visionary creator Franco Dragone have teamed up to create AMYSTIKA – The Secret Revealed, a fantastical and mysterious production which immerses the audience in a spectacle of euphoric, stunning illusions, one-of-a-kind special effects, jaw-dropping stunts and much more, beginning preview performances Dec. 27. The property is encircled by Miracle Mile Shops with more than 170 specialty stores and restaurants. Planet Hollywood Resort & Casino is operated by a subsidiary of Caesars Entertainment, Inc. (NASDAQ: CZR). For more information, please visit planethollywoodresort.com or the Caesars Entertainment Las Vegas media room. Find Planet Hollywood Resort & Casino on Facebook and follow on Twitter and Instagram. Must be 21 or older to gamble. Know When To Stop Before You Start.® If you or someone you know has a gambling problem, crisis counseling and referral services can be accessed by calling 1-800-522-4700 ©2021, Caesars License Company, LLC.