Internationally renowned restaurant, MR CHOW, is now open at Caesars Palace. The Las Vegas location is the seventh of the luxurious Beijing cuisine eatery, joining the ranks of notable hot spots in Miami, Malibu, New York City, Beverly Hills and the original location in London. From the moment guests arrive, MR CHOW will entertain and inspire, from the unparalleled design to the impeccable service to the notable cuisine.

Michael Chow is not only a successful restauranteur, but also a highly regarded artist and designer. In addition to designing all of his MR CHOW restaurants, including the newest Caesars Palace location, Chow has designed Giorgio Armani boutiques and his breathtaking home in Holmby Hills, Calif.

Chow's credence is to perfect every detail; every detail is a universe. With that understanding, every detail has a truth and focus and there is only 'one-way, only-way,' to execute it, for every single element from colors, to scents, to textures, to sound.

The first experience guests have at MR CHOW is before even stepping into the restaurant, with an illuminous champagne lounge entry point on the casino floor of Caesars Palace. Champagne represents celebration and elegance, two attributes at the heart of the MR CHOW philosophy. Guests are welcome to sip on a variety of premium champagnes such as Krug Grande Cuvee or Dom Perignon from the famous champagne trolley, while taking in the bright space and the Jeff Koons "Balloon Venus" sculpture on display.

From the champagne lounge, guests travel up a set of private elevators to the nearly 1,600 sq. ft., restaurant. Once inside, they will discover a fully stocked wine room with more than 150 selections prominently featured behind a floor to ceiling glass partition. On the other side of the space is the lounge with plush bronze furniture and custom Clive Barker artwork, where guests wait for the maitre d' to escort them to the table. On the journey to the table, guests can appreciate the landscape of the round, white Venetian Plaster and Plexiglas lined dining room with outer banquette seating, the 150 plus Lily floral arrangement in the center, the bold dark wooden bar with shelves extending to the ceiling lined with the finest spirits and the large windows and French doors leading to the terrace overlooking the famous Garden of the Gods Pool Oasis. The nearly 250 seat restaurant includes three private dining rooms, bar seating and four terraces which will have seasonal seating.

The focal point of the restaurant is the one-of-a-kind kinetic sculpture, suspended from a 60ft dome. Created by Chow and constructed by TAIT, the 3,800 lb. fiberglass and aluminum framed sculpture is coined "The Moon," as in its inactive state it resembles a full moon. However, throughout each evening, the sculpture puts on a four-minute show as it maneuvers into various configurations. The outside of the sculpture is a crisp white, echoing the monochromatic coloring of the room, while the inside is Yves Klein Blue.

Once seated, guests are left in the hands of the captain, who with the help of a team of servers and assistant servers, are to ensure a harmonious meal experience. Guests can choose to indulge in an additional glass of champagne from a second champagne trolley.

Dining at MR CHOW is much like going to the theater, full of entertainment. Six shows are presented to guests each evening. The fame and notoriety of MR CHOW is in large part attributed to these shows. The shows are: the champagne trolley, the decanting of the wine, the Sole filleting, the Beijing Duck, the MR CHOW noodle show and the dessert trolley.

The cuisine is traditional Beijing, meant to be served communally, to ensure all guests have the opportunity to experience each dish. The principals are entrenched in a theory of harmony, striving to balance yet stimulate the senses equally. The menu is comprised of classics, dishes that have been MR CHOW staples for the last 48 years. In nearly five decades, only 25% of the menu has changed. For the first course, guests won't want to miss the chicken satay, turnip puff and glazed prawns. For entrees, notable dishes include the Ma Mignon, which has been prepared with the same recipe since 1975; green prawns, which are also immortalized in a portrait by Keith Haring; the MR CHOW noodles; and China's crown jewel, Beijing Duck, which is roasted to order and carved tableside.

Created behind a sprawling, richly finished bar located on a lower recess with views of the terrace and pool, MR CHOW libations are comprised of signature selections. Fan favorites include the Chow-lini with house-made peach foam and champagne, the lychee martini and Red 22 & Collins made from fresh strawberries, Aperol and pink grapefruit juice.

At MR CHOW, details are everything. There is thought and purpose to every item in the restaurant, no matter how big or small. When it comes to the table setting, the chairs and tables are custom made and can be found in all of the other MR CHOW locations. Dressed in crisp white linen, a spotlight shines from beneath the table, illuminating a hand-blown vase of white orchids. Chow's signature is found on all the tableware—silver engraved utensils, silver Fiji water holders and even white entree plates with a notable signature by Cy Twombly.

Chow is always dressed impeccably with every detail in place—the same is true of the MR CHOW staff. With elegant European style service, the way the staff moves about the restaurant is that of a carefully choreographed ballet. The impeccable service, chic design and signature menu are why MR CHOW restaurants are iconic and have a long-standing loyal fan base, including a variety of celebrities and influencers.

MR CHOW is the newest addition to Caesars Palace's impressive culinary collection. From starting the celebrity chef trend with Wolfgang Puck in 1992, to housing the sole U.S. restaurant of Michelin-starred chef Guy Savoy, Caesars Palace has been trailblazing the Las Vegas culinary scene for decades with world-renowned talents.  As the 50th Golden Anniversary beckons, the evolution of Caesars Palace continues with the reimagining of the iconic hotel's original tower, the Roman Tower, to be completely reborn as the new Julius Tower, with rooms on sale now, available to stay in beginning Jan. 1, 2016. Combined with the exclusive and world's first Nobu Hotel, the Forbes 4-star Laurel Collection and the brand new Julius Tower –Caesars Palace remains a leader of innovation and the ultimate luxury destination to stay or play.

ABOUT MR CHOW
On Valentine's Day 1968 in Knightsbridge, London Michael Chow opened the first MR CHOW and introduced a new concept in fine dining, serving authentic Beijing Cuisine with elegant European style service. In 1974, MR CHOW expanded to the United States opening a location in the heart of Beverly Hills.  New York City welcomed the first MR CHOW on 57th street in 1979, the restaurant described by Givenchy as a "Precious Jewel Box" is one of the most beautiful and successful restaurants in New York City. Over the years, it has become famous for hosting exclusive events for museums, artists and fashion houses.  In 2006 a TriBeCa location opened, featuring a black and white lacquer dining room and original artwork by Julian Schnabel, Andy Warhol and Helmut Newton.  In August of 2009 MR CHOW opened in the "W" Hotel South Beach, located directly on the beach, the restaurant features indoor and outdoor private rooms, a spacious outside dining patio and interior bar and lounge. In December of 2012, MR CHOW's sixth location opened in the Malibu Country Mart. Most recently, MR CHOW was awarded the 5 Star Diamond Award by the American Academy of Hospitality Science for its excellence, service and cuisine. 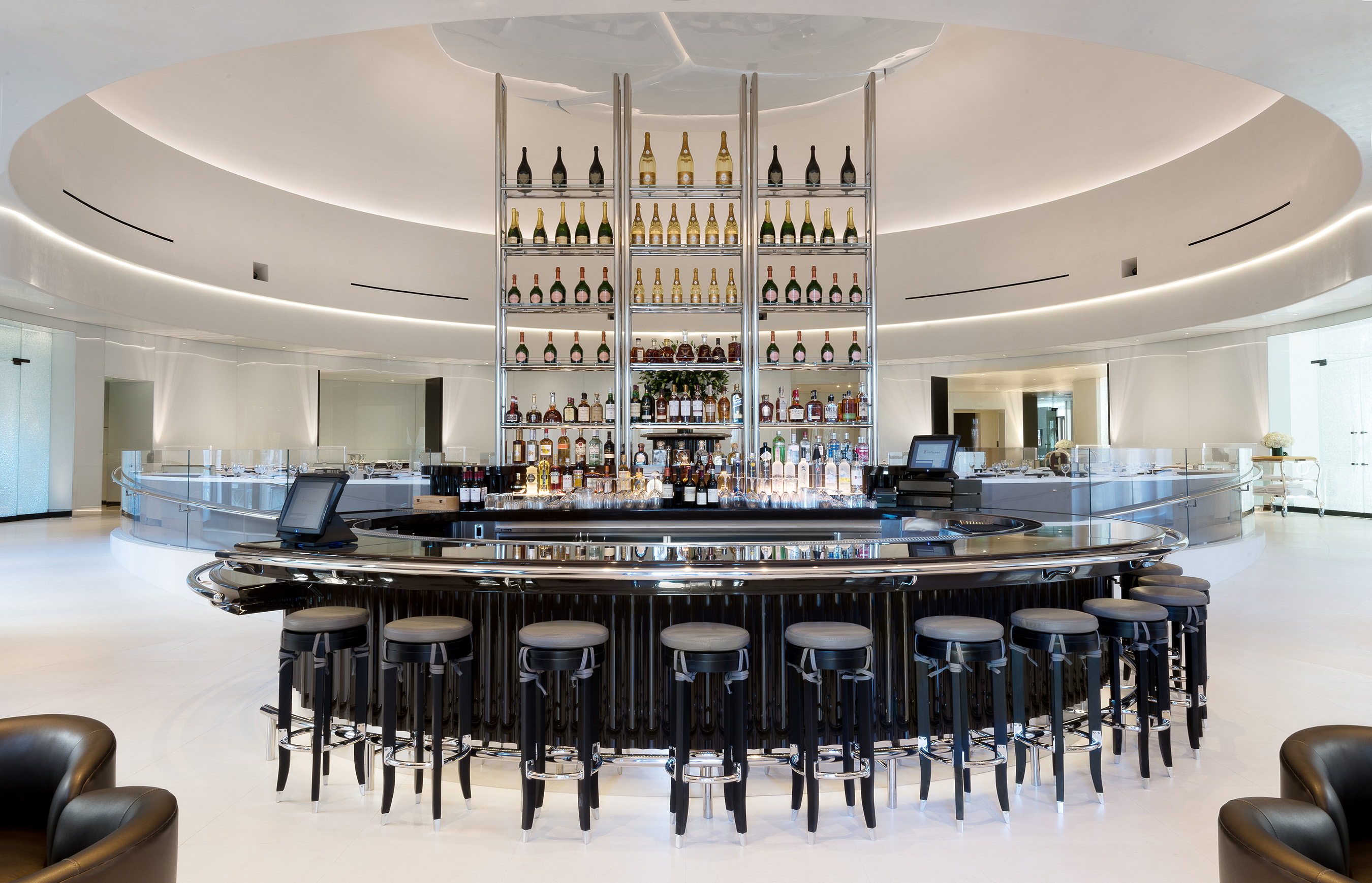 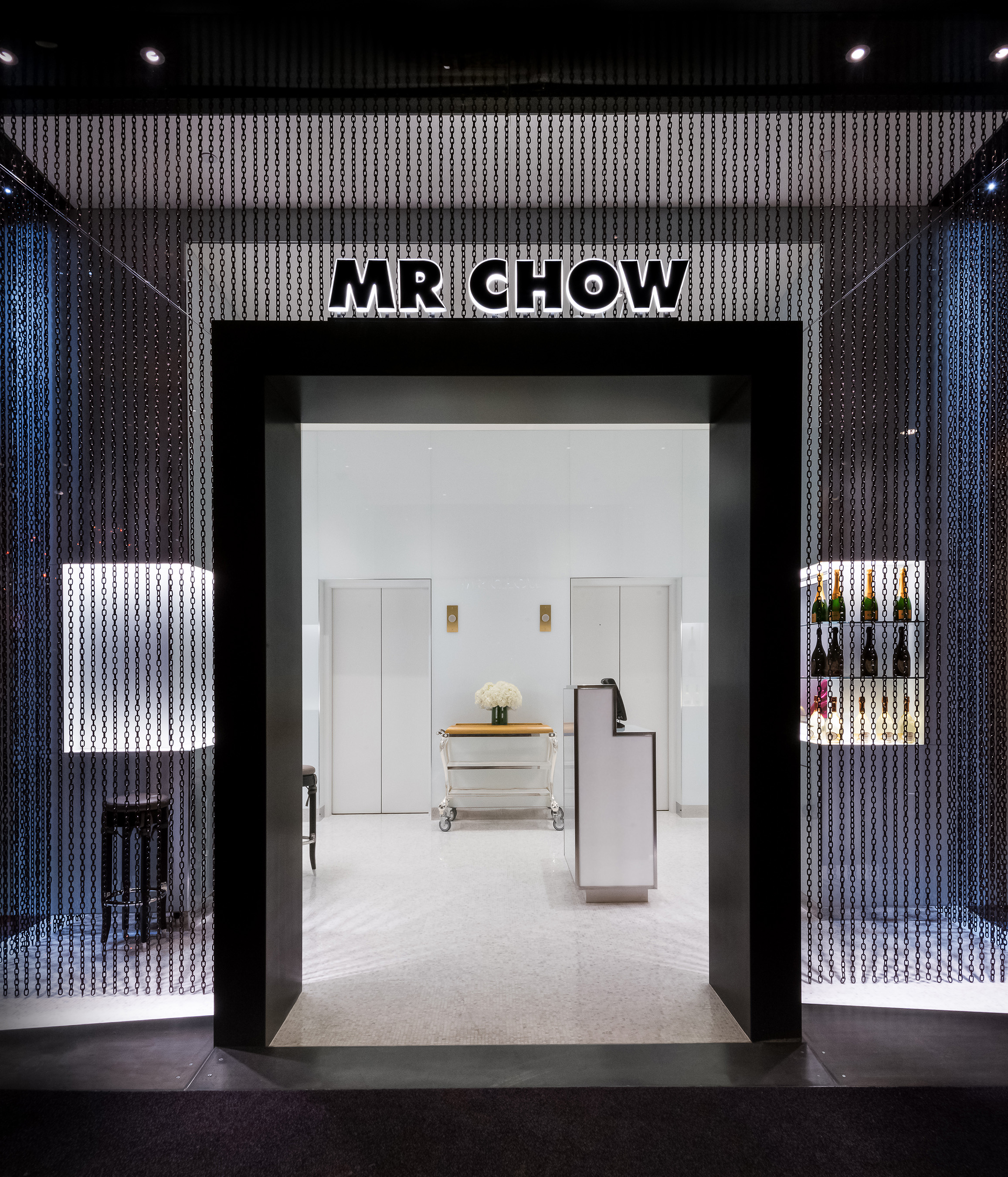 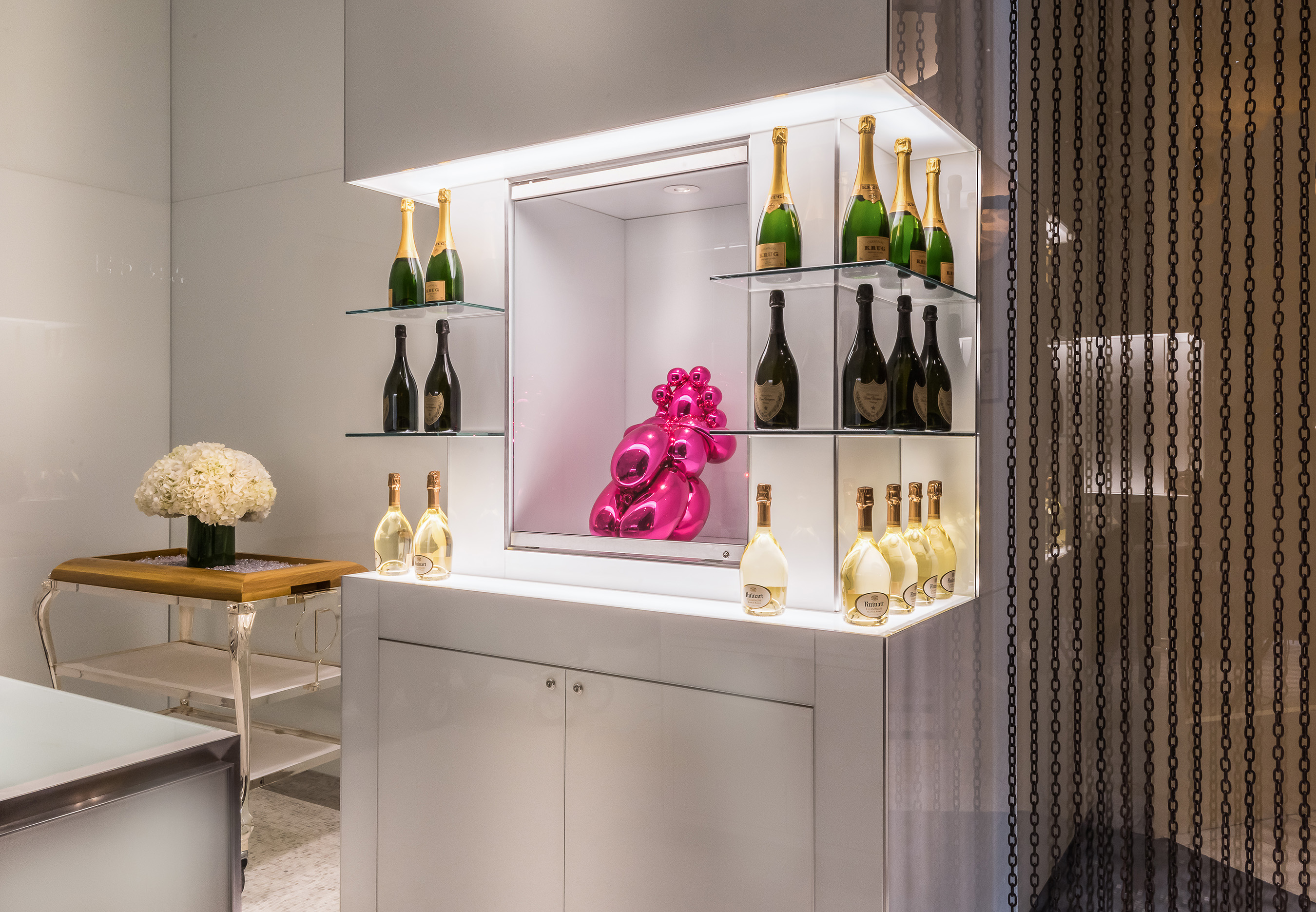 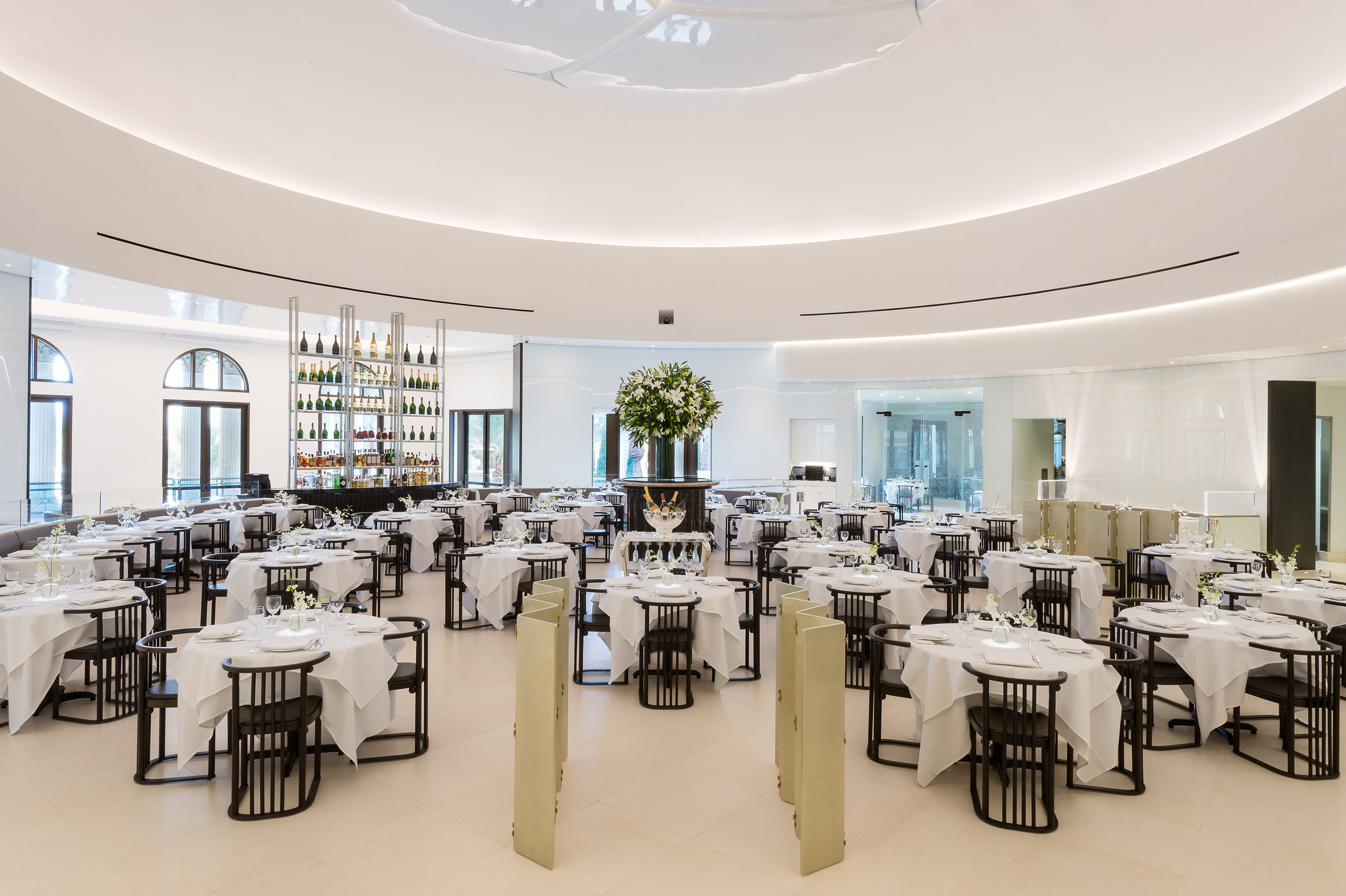