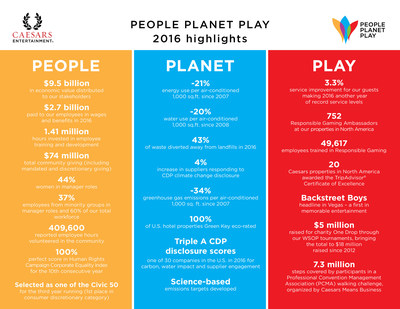 "The eighth annual Citizenship Report underscores Caesars' leadership and commitment to operate responsibly," said Mark Frissora, President and CEO of Caesars Entertainment.  "To us this means making a sustained, positive impact that benefits our customers, employees and the communities that host our properties.  People Planet Play will help these stakeholders understand where we focus and commit resources to drive responsible fun and business practices," he added.

"PEOPLE PLANET PLAY"
People Planet Play is Caesars' new platform that clearly communicates citizenship at all levels of the business and reaffirms Caesars' commitment to its employees, communities, environmental excellence and Responsible Gaming.

PEOPLE: PROMOTING DIVERSE, HEALTHY AND VIBRANT COMMUNITIES AND WORKPLACES
Delivering Value
In the past five years, Caesars has generated almost $50 billion in economic value benefiting the communities it serves, in the form of employee wages and benefits, payments to vendors for goods and services, and payments to governments for taxes and licenses, among other things, including $9.5 billion in 2016.  Additional accomplishments include:

"We had some true highlights in the past year, especially being recognized for the third consecutive time by the Civic 50 as one of the nation's most community minded companies," said Jan Jones Blackhurst, Executive Vice President of Public Policy and Corporate Responsibility for Caesars. "As we continue to expand into new markets, we find that our strong citizenship record is an asset that is strongly appreciated. I am inspired to keep pushing on the issues that impact us all, including gender equality, climate action and human trafficking."

Health & Wellbeing
Employee participation in Caesars' award-winning Wellness Rewards program is more than double the average rate of that of large companies in the U.S.

PLANET: REDUCING OUR IMPACT ON THE ENVIRONMENT
Triple A CodeGreen Performance
In 2016 Caesars' CodeGreen citizenship strategy again delivered industry-leading performance. One of only 30 companies in the U.S. to achieve Triple A scores in three CDP (formerly known as Carbon Disclosure Project) rankings; Caesars ranked A for climate change disclosure, A- for water disclosure and A- for supplier engagement (37 percent of Caesars' top 150 suppliers submitted information to the CDP climate change database). Highlights of Caesars' environmental progress in the U.S. include:

Caesars is committed to an absolute reduction of Greenhouse Gas emissions by 30 percent before 2025 and commits to a 95 percent absolute reduction by 2050 (using 2011 as a baseline). With these goals, Caesars leads the gaming entertainment industry and aligns with the small number of corporations around the world that have publicly committed to science-based targets aimed to keep the temperature rise of the planet below two degrees Celsius.

Caesars' core priorities were identified through a comprehensive process involving feedback from stakeholders, consultations with external experts and reviews by Caesars' Environment, Social and Governance (ESG) Council. "People Planet Play" is written in accordance with the GRI Standards 2016, core option.

About Caesars Entertainment
Caesars Entertainment Corporation ("CEC") is the world's most diversified casino-entertainment provider and the most geographically diverse U.S. casino-entertainment company. CEC is mainly comprised of the following three entities: the majority owned operating subsidiary Caesars Entertainment Operating Company, wholly owned Caesars Entertainment Resort Properties and Caesars Growth Properties, in which we hold a variable economic interest. Since its beginning in Reno, Nevada, 79 years ago, CEC has grown through development of new resorts, expansions and acquisitions and its portfolio of subsidiaries now operate 47 casinos in 13 U.S. states and five countries. The Company's resorts operate primarily under the Caesars®, Harrah's® and Horseshoe® brand names. CEC's portfolio also includes the London Clubs International family of casinos. CEC is focused on building loyalty and value with its guests through a unique combination of great service, excellent products, unsurpassed distribution, operational excellence and technology leadership. The Company is committed to environmental sustainability and energy conservation and recognizes the importance of being a responsible steward of the environment. For more information, please visit www.caesars.com.