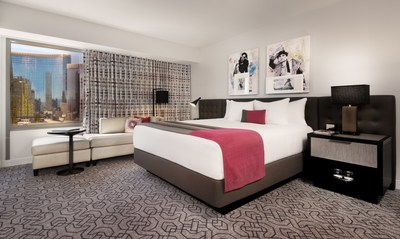 Planet Hollywood is considered the place to play for celebrities and A-listers alike. The resort is the first in Caesars Entertainment's Las Vegas portfolio to have all guest rooms completely renovated as part of a 23,000 Las Vegas hotel room renovation program that will be more than 50% complete by the end of 2017.

Designed by Bergman, Walls & Associates (BWA), the vibrant new guest rooms and suites feature a sleek, white color palette and unexpected décor including suspended sofas and round beds. Bold artwork throughout the rooms and corridors were inspired by the modern rock star guest, showcasing hip and edgy imagery capturing the essence of Las Vegas nightlife. Some guest rooms and suites offer striking views of the Las Vegas Strip, a result of the resort's prime position on the world-famous Las Vegas Boulevard.

In honor of the resort's tenth birthday, Gordon Ramsay Burger is serving a special "10 Year Anniversary Burger". The celebratory burger is made with a dry-aged beef patty and topped with BBQ-braised short rib, pickled shallots, frisée and lemon vinaigrette. Similarly, guests can indulge in a signature birthday cocktail, the "Ketel One® Gold Coast". This celebratory libation incorporates Ketel One® Vodka, apple cider, Perricone® lemon juice and allspice spiked agave syrup served with a metallic gold sugar rim and garnished with a dehydrated apple slice and will be offered at Extra Lounge and Heart Bar. Similarly, Earl of Sandwich is offering a limited edition "Spicy Chicken Fajita" sandwich for $5.99 in addition to an "Anniversary Bundle Special" - any sandwich or wrap with draft beer or fountain drink plus a bag of chips for $10.

During its milestone year, the resort will also welcome the 66th MISS UNIVERSE®, which will take place in Las Vegas from The AXIS on Sunday, Nov. 26 and air live on FOX.  MISS UNIVERSE® returns to Planet Hollywood after being held there in 2015. Contestants from nearly 100 counties will vie to become the next Miss Universe in this year's competition. The event will conclude with reigning Miss Universe Iris Mittenaere of France crowning her successor.

These developments are the latest for the resort with a history of trailblazing innovation in Las Vegas. The resort opened in 2007 with a weekend extravaganza that featured unforgettable performances by Barbara Streisand, Earth Wind and Fire, Sugar Ray, Bruce Willis and John Stewart. Over the years the resort has hosted movie premiers including "21" and "What Happens in Vegas". Planet Hollywood was also the first resort to introduce the pop residency on the Las Vegas Strip with the likes of Britney Spears, Jennifer Lopez, Pitbull and the Backstreet Boys. The Axis is the city's premiere option for superstar entertainment.

*All trademarks appearing above are the property of their respective owners.