"Caesars Entertainment has tens-of-thousands of dedicated employees who, with their sustained focus on corporate social responsibility, have accomplished a lot over the last ten years," said Tony Rodio, CEO of Caesars Entertainment. "I could not be prouder to lead a company that consistently makes a positive difference for our team members, our guests, our communities, and to our bottom line."

The Report covers progress made by the Company in 2018 and during the first half of 2019 in six key areas:

In the decade since Caesars issued its first CSR report based on the Global Reporting Initiative standards, it has achieved significant cumulative progress in protecting the environment and serving its local communities.

10 Years of Cumulative Progress**
Caesars is pleased to share its progress during the last ten years, as it continues to evolve its role within the corporate social responsibility space:

In addition to being the first in its industry to publish an annual sustainability report, Caesars also achieved a variety of notable accomplishments including:

* Figure was calculated using 2,214,685 reported hours multiplied by $25.43, the value of a 2019 volunteer hour as reported by Independent Sector

** Water, energy and GHG calculations use U.S. data only and reflect a 10-year savings that combines actual and avoided reductions measured against the 2008 base year.  Year over year improvements are based on intensities metrics to account for changes in Caesars' building footprints; data is annualized and rounded to the nearest thousandth. Equivalency data was calculated using Livestrong, EPA and EPA, accordingly. 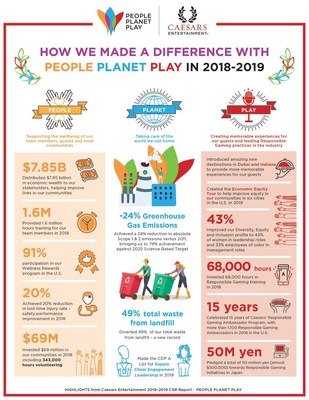