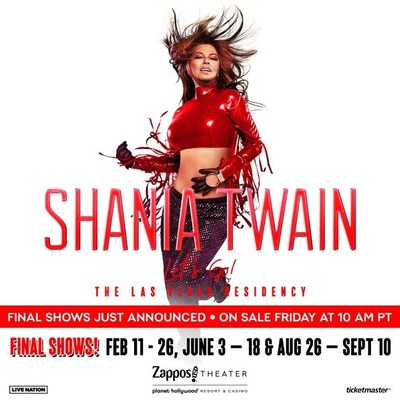 Since opening in December of 2019, Shania, who serves as creative director of the show, has made several updates to the production, including seasonal surprises for the holidays as well as for her upcoming Valentine’s Day weekend performances.

Shania Twain “Let’s Go!” The Las Vegas Residency is a concert celebration of one of Las Vegas’ first female and country music headliners who has paved the way for other superstar residencies across the city. Designed exclusively for Zappos Theater and promoted by Live Nation and Caesars Entertainment, the high-energy production is a nonstop party, taking fans on a spectacular journey through Shania’s monumental catalogue of hits, including "Man! I Feel Like A Woman!," "You're Still The One," and "That Don't Impress Me Much."

Tickets may be purchased online at ticketmaster.com/shaniavegas. All shows begin at 8 p.m.

A limited number of tickets are available for the following previously-announced performances:

Additionally, Shania, Live Nation Las Vegas and Caesars Entertainment are donating $1 of every ticket purchased to Shania Twain “Let’s Go!” The Las Vegas Residency at Planet Hollywood Resort & Casino to Shania Kids Can. Established in 2010 by Shania Twain, Shania Kids Can (SKC) provides a helping hand to kids who are facing poverty and crises in their young lives because these kids need a helping hand and a reason to believe they are not alone. SKC provides programs and support services to ensure these children are learning the skills to cope with and overcome family hardships which, in turn, improves their ability to succeed in school and to succeed in life. For more information about Shania Kids Can, please visit: www.shaniakidscan.com.

SHANIA TWAIN
Shania Twain is a five-time GRAMMY winner and the reigning Queen of Country Pop. With more than 90 million albums sold worldwide and U.S. sales topping 34.5 million, Twain remains the top-selling female country artist of all time. Twain’s albums include Shania Twain, Twain’s Platinum-selling 1993 debut; The Woman in Me, her GRAMMY Award-winning, Double Diamond-selling 1995 release; Come On Over, the best-selling studio album in Soundscan history by a female artist in any genre and the best-selling country album of all time with over 40 million units sold worldwide; and UP!, Twain’s third consecutive Diamond-selling album release.

Recognizing her indelible impact and achievements in music, Twain is the first and only female to receive CMT’s Artist of a Lifetime Award and she recently received the Icon Award at Billboard’s Women in Music ceremony. Twain’s hits include “Any Man of Mine,” “That Don’t Impress Me Much,” “You’re Still the One” and “Man! I Feel Like A Woman!” Shania’s first album in 15 years, NOW, was released in September 2017 and debuted at No. 1 on the Billboard Top 200 albums, making it the first female country release in over 3 years to top the all genre chart. Additionally, the album landed at No. 1 on the Billboard Top Country album charts and went to No. 1 in Canada, Australia and the UK. The release of the album was followed by a year-long sold-out World Tour.

About Planet Hollywood Resort & Casino
Planet Hollywood Resort & Casino is the centerpiece of the famed Las Vegas Strip, with 2,500 beautifully redesigned guest rooms and suites showcasing some of the best views in town, along with endless options of unparalleled shopping, distinguished dining, popular entertainment and a bustling nightlife. A bright, bold addition to the resort’s portfolio, the Ultra Hip Rooms feature contemporary elegance and luxury bedding. Known as the place to play for its roster of A-list celebrity guests, Planet Hollywood’s 231 restyled suites feature stunning views of the glittering skyline and daring décor elements such as suspended sofas, lounge-style living spaces and oversized modern artwork. The resort encompasses more than 100,000 square feet of gaming, Caesars Race & Sportsbook at Planet Hollywood, The Scene Pool Deck, several lounges, an intimate wedding chapel, and a relaxing spa and salon. Impressive restaurants include Gordon Ramsay Burger, KOI, Strip House and more. Home to the first pop music residency in Las Vegas, Zappos Theater is one of the largest theaters on the Vegas Strip and showcases a variety of resident headliners including superstars like John Legend, Scorpions and Shania Twain. Magician Criss Angel performs an over-the-top visual spectacular of “Criss Angel MINDFREAK®” in the newly-renovated Criss Angel Theater. Additionally, Angel along with visionary creator Franco Dragone have teamed up to create AMYSTIKA – The Secret Revealed, a fantastical and mysterious production which immerses the audience in a spectacle of euphoric, stunning illusions, one-of-a-kind special effects, jaw-dropping stunts and much more, beginning preview performances Dec. 27. The property is encircled by Miracle Mile Shops with more than 170 specialty stores and restaurants. Planet Hollywood Resort & Casino is operated by a subsidiary of Caesars Entertainment, Inc. (NASDAQ: CZR). For more information, please visit planethollywoodresort.com or the Caesars Entertainment Las Vegas media room. Find Planet Hollywood Resort & Casino on Facebook and follow on Twitter and Instagram. Must be 21 or older to gamble. Know When To Stop Before You Start.® If you or someone you know has a gambling problem, crisis counseling and referral services can be accessed by calling 1-800-522-4700 ©2021, Caesars License Company, LLC.