LAS VEGAS, July 11, 2022 /PRNewswire/ -- EMMANUEL continues with his successful "Toda La Vida" tour of the United States with a Las Vegas performance at The Colosseum at Caesars Palace on Saturday, Sept. 17, as part of Mexican Independence Day celebrations. The show will mark his first performance at the iconic venue and is scheduled to begin at 9 p.m.

Produced by Live Nation, the show promises the spectacular extravagance of lights, screens, costumes and show quality that EMMANUEL fans and audiences have become accustomed to. With his son Alexander Acha joining as a special guest, "Los Acha" promises a surprising and unforgettable show.

Emmanuel is a Spanish pop icon who leaves an iconic mark on the history of Spanish-speaking music as a generational artist throughout his more than four and a half decade-long successful career.

Tickets will go on sale to the public Friday, July 15 at 10 a.m. PT at ticketmaster.com. Presales for Caesars Rewards members, Caesars Entertainment's loyalty program, as well as Live Nation and Ticketmaster customers, will run Thursday, July 14 at 10 a.m. PT through 10 p.m. PT. 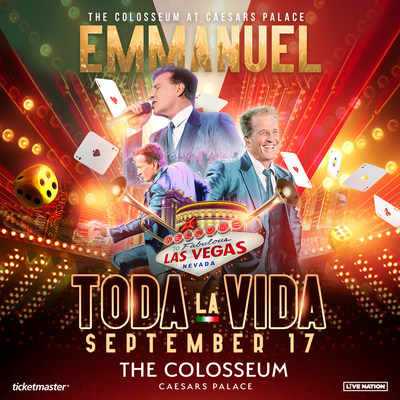