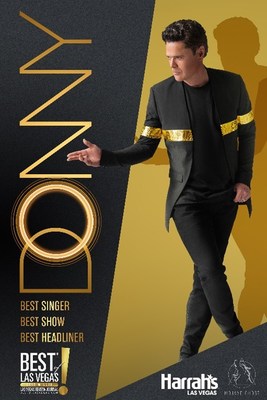 Winner of Best Show, Best Headliner and Best Singer for the 2021 Best of Vegas awards, Osmond's show is a dynamic, energy-filled musical journey of his unparalleled life as one of the most recognized entertainers in the world. Fans are treated to Osmond's engaging performances throughout the show including the fan favorite and showstopping "Auto-rap-ography" – a rap song accompanied by milestones photos and videos from his impressive career of six decades. Donny also does a full Broadway production of his classic Disney hit from Mulan, "I'll Make A Man Out Of You." The show also includes an audience interactive segment where anyone can request any song he's ever recorded.

Dates for previously announced shows through 2022 are available at www.caesars.com/shows.

For more information, scheduling and to purchase tickets, please visit www.ticketmaster.com/donny. Tickets go on sale to the public starting Friday, September 23 at 10 a.m. PT. Presale tickets for Caesars Rewards members as well as Ticketmaster customers will be available Thursday, September 22 from 10 a.m. to 10 p.m. PT. Performances will take place nightly from Tuesday to Saturday with all shows beginning at 8 p.m. A limited number of tickets for Donny's Pre-Show VIP Experience will also be available.

This show is produced by Mojave Ghost. Greg Young of Mojave Ghost has produced Tony and Drama Desk Award-winning productions on Broadway, as well as more than 2,500 concerts, 40 Broadway shows, national tours and IP exhibitions throughout the domestic U.S. Mohave Ghost has also produced Donny's tours for the past decade. Osmond's residency is directed by Raj Kapoor, who has produced The GRAMMYs, Latin GRAMMYs, The Academy Awards, Academy of Country Music Awards and Emmy Awards. Kapoor has also directed and produced hit Las Vegas residencies for Shania Twain, Mariah Carey and the Backstreet Boys. The all-new show is choreographed by Emmy Award-winning duo, NAPPYTABS.

About Harrah's Las Vegas
A hidden gem in the heart of the Strip, Harrah's Las Vegas features 2,542 redesigned guest rooms, a remodeled casino floor and direct access to CAESARS FORUM Conference Center. The renovated hotel rooms and suites feature bold purple and blue hues that complement the cream-colored décor, dark wood accents and contemporary fixtures. The resort offers 87,000 square feet of casino space, the Caesars Race & Sportsbook at Harrah's Las Vegas, The Spa at Harrah's Las Vegas and more than 25,000 square feet of meeting and convention space. Dining options encompass everything from PizzaCake by Buddy Valastro, to the chef-driven Fulton Street Food Hall – with a new location of Bobby's Burgers by acclaimed Chef Bobby Flay – to the upscale setting of Ruth's Chris Steak House, a romantic venue with breathtaking views of The Strip. Harrah's outdoor bar, Carnaval Court, brings high energy to the Las Vegas Strip with live music and some of the world's top flair bartenders who juggle and pour to perfection. A wide variety of entertainment options include the first-ever solo residency from Donny Osmond, as well as AGT's Tape Face, Menopause the Musical, X Country and "An Evening with Whitney: The Whitney Houston Hologram Concert." Harrah's Las Vegas is operated by a subsidiary of Caesars Entertainment, Inc. (NASDAQ: CZR). For more information, please visit harrahslasvegas.com or the Caesars Entertainment Las Vegas media room. Find Harrah's Las Vegas on Facebook and follow on Twitter and Instagram. Must be 21 or older to gamble. Know When To Stop Before You Start.® If you or someone you know has a gambling problem, crisis counseling and referral services can be accessed by calling 1-800-522-4700 ©2021, Caesars License Company, LLC. 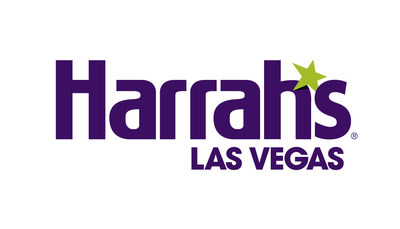