LAS VEGAS, Dec. 23, 2022 /PRNewswire/ -- Offering the ultimate race viewing experience for the FORMULA 1 HEINEKEN SILVER LAS VEGAS GRAND PRIX, Caesars Entertainment is taking it to a whole new level with the "Emperor Package." The extravagant package is a one-of-a-kind, $5 million VIP offering unlike anything else. Promising the most curated experience during the inaugural race weekend, this impressive package includes the most luxe collection of amenities along with five-night accommodations in the award-winning Nobu Sky Villa inside Nobu Hotel at Caesars Palace. With its sweeping views of the racetrack and sitting in the heart of the Grand Prix™ straight away, the villa's terrace provides unparalleled views of the action. 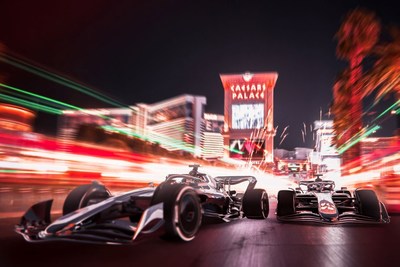 The Nobu Sky Villa is an expansive 10,300-square-foot, three-bedroom space, expertly designed by the Rockwell Group. Boasting a 4,700-square-foot terrace sitting atop the Nobu Hotel, the outdoor space is perched only 140 feet above the world-famous Strip. Additionally, the terrace includes the ability to host up to 75 guests to watch, celebrate and cheer on what promises to be the race of a lifetime.

Caesars Entertainment has leveraged its roster of celebrity culinary talent to offer an exclusive dining experience that money cannot buy. Michelin-starred restauranteur Chef Nobu Matsuhisa will personally create a special menu and host a private dinner in the Nobu Sky Villa. Guests will feast on Chef Nobu's signature New Style Japanese cuisine, all the while indulging in the finest sake and Japanese whisky hand selected by Chef.

"Leaning into the unrivaled view the Nobu Sky Villa offers, we have created a package to meet the dynamic energy and prestige this historic weekend of racing will bring to the city," said Sean McBurney, Regional President for Caesars Entertainment. "Tapping into our rich network of amenities and world-class talent, the Emperor Package, mixing unmatched views, direct access and best-in-class service, will be the ultimate experience for some very lucky racing fans that cannot be duplicated."

In addition to the Nobu Hotel Sky Villa's notable features, the package will offer access to race festivities and remarkable VIP treatment and experiences, including:

As an added gift, Caesars Palace will invite the Emperor Package holder and a guest to attend the sold-out and critically acclaimed residency "WEEKENDS WITH ADELE" at The Colosseum at Caesars Palace.

For more information on the Emperor Package, please visit here or for more on Caesars Entertainment's offerings over race weekend, visit www.caesars.com/events/f1.

Caesars Entertainment is a proud Founding Partner of the FORMULA 1 HEINEKEN SILVER LAS VEGAS GRAND PRIX. For further information, F1 fans can sign up for updates at f1lasvegasgp.com.

About FORMULA 1 HEINEKEN SILVER LAS VEGAS GRAND PRIX
Formula 1® and Liberty Media are working together to promote the FORMULA 1 HEINEKEN SILVER LAS VEGAS GRAND PRIX in partnership with the Las Vegas Convention and Visitors Authority. The inaugural race weekend is set to take place November 16-18, 2023. Taking place at night against the iconic Las Vegas backdrop, the track will see drivers reach jaw-dropping speeds of over 210 mph (340 kph) as they race around some of the world's most iconic landmarks, hotels and casinos on the legendary Las Vegas Strip. For more information, visit www.f1lasvegasgp.com